One year ago today, writer Dana Rodney lost her American Dream in the Tubbs Fire. This is her story. 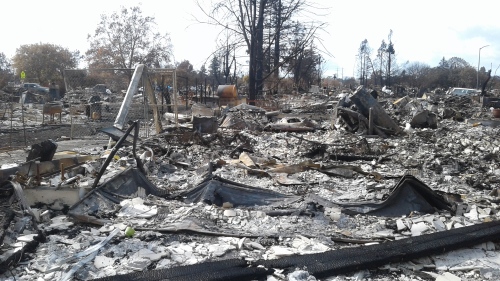 I used to live in a sprawling suburban subdivision called Coffey Park in Santa Rosa, California, named after its original owner, Henry Coffey.  Its streets were dubbed the likes of:  Mocha Place and Espresso Court.  It was a lower-to-middle income, first-time homebuyer’s, suburban, California American Dream.  But in the course of a few hours the night of October 8, 2017, over fifteen hundred homes in Coffey Park burned to the ground as a result of a monstrous wind-driven wildfire.

I wasn’t living in the house the night it burned down, and I seem to lose many people’s compassion when I say that.  I lived in it for 6 years, then rented it out to a single mother who was newly divorced.  I identified with her, since I had been a single mom, which was one of the reasons I had been so proud to buy the house on my own.

With my own daughter gone, I had moved to a smaller, less expensive place, as a money-saving plan.  Still, that house represented my life’s savings from a business I started 20 years earlier on a wing and a prayer in the Great Napa Valley—the famed wine-producing, exclusive, tourist-attracting, high-income land of the beautiful people who could afford it.  Ironically, even though I had a successful business in the Napa Valley, I couldn’t afford to buy there. My house was in the next county over. Still, that house was my pride and joy. It was my retirement plan.

But I wasn’t living there the night the house burned down. 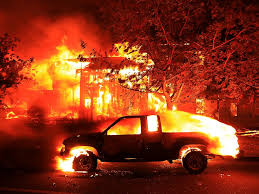 I texted my tenant as I followed the news that night.  “It’s time to get out,” I told her.  “I have already left,” she replied.

I went to visit the site a week or so after the fire with my insurance adjuster, an obese, nicotine-drenched fellow they shipped in from Texas, who showed me my insurance summary in progress on a laptop from the tailgate of his truck.  My life savings was in the hands of a bloated, over-worked man in a pick-up truck. We had to drive through a line of National Guard soldiers who handed us face masks and shovels and leather gloves before allowing us to proceed to the property. 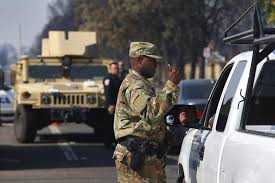 It was a pile of ash.  Where was the refrigerator?…let alone the second floor…the foundation… the chimney? It was just a flattened  pile of ash. Unrecognizable. Texas Guy said, “I have seen all I need to see.”  We drove away.

A few weeks later I went back on my own.  The National Guard was gone; it was old news.  I walked around the lot, just taking it in. One of the only things that survived was a cement statue of Quan Yin I had placed in a corner of the garden. The Goddess of Compassion. How fitting—or not. I decided it was the one thing I would take with me from the burned lot.

As I struggled to lift it into my car, a man parked a car nearby and began walking toward me.  “Are you one of my neighbors?” I asked, guessing.

“No,” he said. “I am from an organization in the Bay Area that wants to help fire victims. Was this your home?” He asked. “Could you use some financial assistance?”

“Sure,” I said, honestly. I was expecting to sign some forms or be asked further questions. Instead, he pulled out a wallet and started peeling off twenty dollar bills and handing them to me. It was shocking.  He didn’t know me. 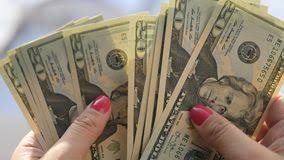 For the first time since the fire happened, I cried.

Dana Rodney started writing seriously after retiring from being a small business owner in St. Helena, CA in 2016. She is currently working on an historical novel titled “The Butterfly Wing” about a female Chinese immigrant to San Francisco in the 1850s, as well as a collection of humorous pieces about growing older as a single woman, titled “Turning into a Pumpkin: The Menopause Monologues.” Dana lives with her dog Jasper in St. Helena, CA.

2 responses to “One Year Later”