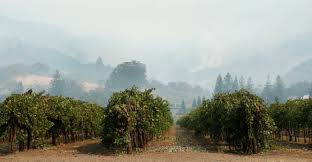 This morning as Rue and I walked the mile-long trail through vineyards from the library to the bone dry Napa River, I realized just how lucky we were. Smokey haze had been replaced with clean air for the first time since the Sunday night our fiery ordeal started. Overnight, light, moist ocean breezes blew the evil air out of the valley.  Puffy cumulus clouds dotted the blue, sunshiny sky. Up north over Mount St. Helena, darker stratus clouds promised rain. Our little town of St. Helena appears to have been spared. 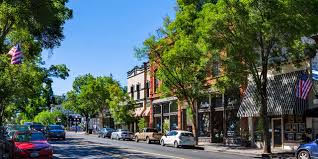 In the midst of all the devastation, I want to share two happy stories. Last Tuesday my wife Colleen, our friend Mary, Rue and I evacuated to San Francisco. We stopped for lunch on Clement Street, still weighing our options as to which family or friends to impose ourselves upon. After eating, while Colleen and Mary still conversed, I took Rue outside and came upon a couple smooching.

I asked, “Excuse me, do you two know each other?”

The lady laughingly said, “Yeah… I think so.”

That started a conversation where I explained that we had come down from the fire. They left wishing me luck. A few minutes later the woman came back and gave me her number and invited us to stay at their unoccupied apartment in Berkeley. While I told her we had other options, I was taken aback by their generosity. “Thank you so much,” was all I could say.

Last night we went out for dinner at Market in downtown St. Helena. In the back a large group of tables was filled with a group of firefighters from San Diego the restaurant had been feeding all week. This was their last night after ten days of twelve-hour shifts. As they stood to leave, after taking pictures, the patrons and staff gave the first responders a standing ovation. They and the other firefighters had saved our town.

On our way out, I noticed a sign on the window that said,  “The love is thicker than the smoke.”

Comments Off on Thicker Than Smoke