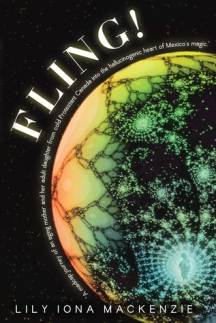 Last October I attended an event of the San Francisco Chapter WNBA, Women’s National Book Association.  Member authors presented their lately published books, and I was captured by Lily Iona MacKenzie and her 2015 release, Fling! I ran right to the signing table after the presentations and bought a copy, although later I received an audio version, which I listened to on trains crossing Spain (no plain, no rain.)

Delighted, I wiled away the hours lost in the scenery and MacKenzie’s imaginative and wacky story of mothers and daughters, fulfilling one’s dreams and the magic that comes when you live life to the edge and possibly over. I felt like I was on my own quest, living my Spanish vacation to its maximum, experiencing the magic of discovery and expansion that comes with travel to new places. Everything thrummed with excitement, including my book—Fling!  Life couldn’t have been better.

Several days later, the book finished, and watching the lights coming on from our balcony overlooking La Sagrada Familia, I ruminated on Fling!.

Set between three generations of women and four countries, much of the story takes place in Mexico. I know Mexico well and thought about what I’d learned by visiting the “parent” country, Spain. The mysterious twisting cobbled streets of the medieval cities, the ubiquitous artistic expression, the grand churches, the tile work, the crowds promenading through tapas bars in the evenings, the sense of happy self-actualization of the Spaniards—the foundation of the Mexican culture. I even found the magical realism: on the strains of symphonic music wafting through Granada’s cathedral, the phantasms flitting in the gardens of Generalife, the rain-bowed light streaming through the glass of La Sagrada Familia, the voices of antiquity whispering from somber portraits in the Prado Museum, the sensual buildings of the Modernista, a cathedral in the middle of the Mesquita!

Then it was November 9th and only the unreal remained. We’ve had almost a year lacking magic. I say it’s time to look away from the devastation of the environment and our rude and hateful world of racism, deportations, killing sprees, and the crumbling of our right to life, liberty and the pursuit of happiness. It’s time to find life’s fountain of youth and wonder again. Fling! is full of it. 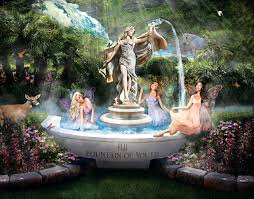 Like any compelling saga, the story is told in multiple points of view across a span of three lifetimes. It opens with Malcolm MacGregor’s story of how his granddaughter Bubbles, née Heather, “had danced right off one of his paintings, landing in the family potato patch. . . .” in  1906 on the Isle of Skye, where “unpredictable things happen.” Her hippie daughter, Feather, has also inherited the Scottish sensibility of unpredictability, which shows up as  “Manannán  Mac Lirs’s underworld” in her paintings.

Bubbles has convinced Feather to come home to Calgary, Canada from San Francisco to celebrate her 90th birthday, but she has another motive. Bubbles has received a notice from the dead letter office in Mexico City, asking her to pick up her mother’s ashes, left seventy years earlier, in the late 1920s. Heather had left her family to go to Mexico with a married man. Bubble wants Feather to take her to Mexico so she can recover the ashes and give her mother a proper burial.

The story of their odyssey is woven together with the stories of their colorful Scottish ancestors, creating a family tapestry. The two women travel south from Canada to San Francisco and then in Mexico over six months. In magical Mexico, Feather learns much about her mother. She hasn’t fully believed her mother’s story, but when Bubbles’ long-dead mother, grandmother, and grandfather turn up, she begins to understand the depth of her and her mother’s magic. Feather, who’s been seeking “The Goddess” for years, helped by Indian villagers mistaking Bubbles for a well-known rain goddess and praying for her to bring rain so their land will thrive again, realizes she’s overlooked her own mother.

Bubbles’ quest and a new man in her life has increased her zest for life. A life-long entrepreneur, she’s convinced she’s found the fountain of youth at a mineral spring outside San Miguel de Allende and she’s determined to bottle the water and sell it. A natural risk taker and believing she’s immortal, Bubbles lives life to the fullest in every way. Feather learns from Bubbles’ youthful spirit that it’s never too late to realize your dreams. Both have found the fountain of youth and they know that they will see everyone again, “if not in the flesh, then their souls hovering as a hummingbird, or fluttering as a butterfly, or floating above the earth as clouds.”

Mackenzie has created two strong characters who are hilarious and endearing. Bubbles is a zany gypsy who takes after her mother, the ashes left at the dead letter office. She’s tough and tender and wants to reconcile with both the mother who left her and the daughter she left. At 90, she’s finally come of age and found the love of a good man. Feather, née Heather, at 57 is a San Francisco artist who desperately wants to break free of the male dominated world. She loves her mother but can’t quite connect to her as Bubbles lives inside a bubble that Feather feels has never burst. Feather grew up in her mother’s shadow, “. . .a moon, orbiting a planet.” and has worked hard to become her own person. Pragmatic, fearful and a worrier, she’s not much of a risk taker except in her art. She longs to be in charge of her own life. For all Bubbles exuberance, Feather is equally reserved, although she’s got a sharp eye and makes funny observations.  She’s Bubbles’ touchstone and Bubbles is Feather’s catalyst to relax and enjoy life.

The story is told in both past and present tenses. Mackenzie’s skill in sliding in and out of tenses and in and out of voices is superb. Chapter headings clue readers into time periods and goddess images separate scenes. In the audio version I listened to in Spain, Anna Crow, the reader, modulated her voice sufficiently to follow the changes and determine the speaker. I had no problem keeping up with her reading.

Mackenzie’s language is straightforward and sensory. Her descriptions are vivid and progress to surprising comparisons and existential observations throughout the book. For example, On the plane to Mexico City they encounter a storm: “Lighting rips open the night sky, ragged edges illuminating patches of earth below. She [Bubbles] tries to ignore the severe turbulence. It reminds her of riding horses on the farm. . . . She could be going along, enjoying the ride, when suddenly all hell would break loose. . . . But then, life is like that. Everything seems fine. Then suddenly, it isn’t.” It’s these observations that are the real charm of the book. It’s like living inside the characters’ minds. And of course, these characters think the wildest things! 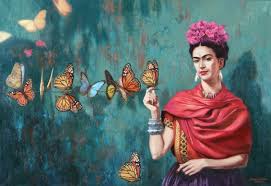 In part, the collision of their Celtic roots and lore with the rich blend of Spanish colonial and indigenous Mexican characteristics and culture they encounter in Mexico is what makes this all work. Of course, magic happens! The dead come to visit, old ladies are mistaken for long awaited goddesses, and people change while finding their dreams. Ultimately, it’s the joy of life, la alegría de la vida that is the Fling! fountain of youth and it can be found or re-found at any age. Rereading passages of Fling! as I write this review has lifted me above my profound sadness for the most recent gun violence in our country. I’m feeling kinder toward our leadership. I feel like dancing, in fact. Maybe a Mexican Hat Dance? Fling! is a perfect book for now. As renowned author Lewis Buzbee puts it, Fling! is both hilarious and touching. Every page is a surprise, and the characters! I especially loved Bubbles, one of the most endearing mothers in recent fiction. A scintillating read.” ~Lewis Buzbee, award-winning author of The Yellow-Lighted Bookshopg review and faculty at University of San Francisco MFA program.

One response to “Fling!”