In Memory, With Love

People do not die for us immediately but remain bathed in a sort of aura of life which bears no relation to true immortality but through which they continue to occupy our thoughts in the same way as when they were alive. It is as though they were traveling abroad.  Marcel Proust 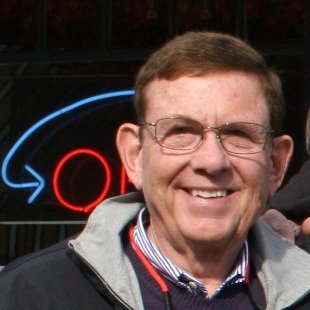 I’m waiting for Mike, but he’s not coming back. He left us last month as the dreary rains dried up and the Napa Valley rioted into leaf and bloom. I was sure he would emerge from his Beemer in the swirl of white petals billowing from the trees shading the Upper Valley Campus parking lot. The prodigal student returning, his hat jaunty over his crisp pink button-down and white duck trousers a manuscript tucked into his portfolio and a twinkle in his eye.

You might say Michael was this teacher’s pet. But in the four years Michael Weaver Layne and I shared stories and literary criticism, we became more than teacher and pet. We became friends.

Mike trusted me with his words and I saw in his writing the potential for acclaim. His mind was wildly creative and he wrote with abandon and humor. It was a joy to read his stories and a joy to know him. Jonathan Franzen says on death: “The fundamental fact about all of us is that we’re alive for a while but will die before long. This fact is the real root cause of all our anger and pain and despair. And you can either run from this fact or, by way of love, you can embrace it.”  Mike Layne loved life, embraced it, and brought lightness to my world.

“Everyone must leave something behind when he dies, my grandfather said. A child or a book or a painting or a house or a wall built or a pair of shoes made. Or a garden planted. Something your hand touched some way so your soul has somewhere to go when you die, and when people look at that tree or that flower you planted, you’re there. It doesn’t matter what you do, he said, so as long as you change something from the way it was before you touched it into something that’s like you after you take your hands away.”    Ray Bradbury, Fahrenheit 451

Mike Layne’s legacy remains with us in his beautiful architecture, infinity pools, irreverent short stories and an unpublished novel, Mammoth, written in the style of a Clive Cussler thriller. It was Mike’s dearest wish to co-publish Mammoth with Clive. At his death, Mike was negotiating with Clive’s editor for a leg up. He was going to make it.

Mike was also compiling a book of short stories to be titled Blah Blat and Blather. The following is one of the stories slated for the collection and one of the last pieces we worked on in class.

In an email to our group:

Dear incredible writers,
After class, at home perched on my porch with another full glass of Pinot, I ruminated over the class critique. The original ending, something I fashioned from memories of Bambi came out as planned  (I admit to being a Disney fan, Frozen giving me warm toasty moments).

But Daphne’s observation jarred me into re-crafting the ending, cleansing it of much Walt’s fantasy.  So—–with meekness, I’ll stand it on.
Mike

Lord is my Shepherd

No moment’s timing could have been better than when Lord entered my life. Vicky had left me, slamming the door in my face, ending what I thought was a near perfect relationship.

“What could be wrong with wanting sex three times a day?” She screamed as she stomped down the steps to the gravel drive.

“I suppose nothing, except the demand it imposes on durability,” I shouted. I felt durable enough, after all, I run marathons. But even runners need occasional breaks.

I watched as she throttled her Subaru down my long drive to the Silverado Trail.

I poured a Pinot into my glass, filling it to the rim and settled into the teak chair on my porch and began dissecting my thoughts. No more evenings with Vicky on the porch, watching the cars go by. No more evenings in bed with Vicky feeling my manhood sucked away ––– sitting solo on the porch –––– not nearly as bad as I had feared. I missed Vicky the nympho but welcomed the respite from her lusty demands.

I filled my glass once more and gazed across my vineyard and down the vacant drive to the Silverado Trail. A pickup swerved into my drive, sliding to a stop, its driver kicking something out of the truck’s rear bed.

“Oh no! Good lord not again.” I cursed. From my porch, I could see a little gray ball of fur yelping desperately at the truck as it sped away.

“Damn,” I growled, “Another abandoned orphan.”

It occurred all too often. An unwanted pet dropped into the midst of paradise to fend for itself, or if lucky, find adoption.

I set my glass on the table and loped down the drive. “Hey boy, come on it’s okay,” I shouted.

Rather than dart off into traffic to be run over, as these outcasts often did, the little fur bundle, yipping happily, dashed in my direction zigging down the drive. I knelt to my knees and it sailed into my arms, swabbing my face with its tongue.

“Good lord stop that,” I shouted with a laugh, holding the pup at arm’s length and just beyond the reach of its tongue. Lordy Lordy, you’re an affectionate little dog.

From that instant, Lord became his name and we became inseparable, best buddies, constant companions, and like the nights with Vicky, Lord and I shared the bed –– the difference, cuddling and sleep our only goal.

He loved television, particularly the Simpsons. He would lay motionless for episodes, his chin on crossed paws, one ear up and one down, his one blue eye and one brown, following Marge’s blue hairdo as if it were another candidate in need of herding.

Lords intelligence amazed me. I figured out ways for us to entertain each other. I taught his tongue to read braille. I made up plastic cards with raised dots for the words, roll over, sit, or shake. Lord would lick them, then for a treat, perform the command.

Other things too. The fire hydrant I brought home from a flea market and placed in the yard. Lord understood immediately and from that day on, it stood as his private urinal.

Lord grew into a fine sheep dog, eager to chase a Frisbee. He loved my pool and the mallard that would drop in on misty mornings. In fact, Lord loved everything. His insatiable fondness for life, his tragic flaw.

His first affair was with the skunk who lived along the Napa River, his amorous advance meeting with a blast of spray. Repeated baths of tomato soup did little to clean Lord or mask the skunk’s odor.

Next, he sought romance with a porcupine. Our vet spent half a day plucking quills from Lord’s muzzle.

In spite of these miss-adventures, he loved every animal on the ranch. The raccoons that he treed at night with gleeful barks, the squirrels whose walnuts he would dig up and chew like a bone.

Lord become a canine gigolo, lavishing love on all the ranch’s creatures.

Born to herd, he constantly dashed along the river or between the vines, organizing the progress of any creature he could spot. Quail scattered at his approach, gophers ducked back into their burrows, butterflies drifted higher as he bounded into the air to move them this way or that.

Herding was Lords passion and the bigger the thing, the better the challenge.

One morning as the lingering fog lifted, a UPS truck sped down the drive, a challenge that Lord could not ignore. Barking with delight and nipping at the tires he tried to swerve the truck to the side of the driveway.

Lord dashed in too close tripping under the truck’s front bumper. The driver unable to avoid hitting Lord rolled over him with a sickening thump.

Twisted and broken, Lord lay on the drive his tongue still lapping the air, his eyes bewildered, his hind leg twitching, then turning still.

I scooped him up and hugged him to my chest wishing desperately for one more swish of his tongue, one more wag of his butt.

I felt his last shudder. It was over.

He slumped, limp in my arms, his legs dangling in weird directions from his crushed pelvis.

“I’ll miss you, Lord,” I whispered in his ear, tears rolling down my cheeks and dripping from my chin.

I buried Lord under an ancient oak tree and within sight of my perch on the porch. I filled my glass with pinot to the rim, with eyes still pooling tears I stared at the mound of freshly piled soil.

I looked at the two dog biscuits, Lord’s favorites that I placed next to his Frisbee on top of the mound. Two squirrels scurried down from the tree and scooped the soft dirt, reverently burying the biscuits.

Their heads popped up at a sound from the river. I followed their gaze. From beneath the trunk of a fallen tree, hidden in shadows, I spotted the outline of the skunk. The squirrels twitched their tails, alerted by scraping from the gravel drive. The porcupine shuffled past casting the burial mound a passing glance then disappeared into the mustard growing beneath the vines in the vineyard.

I looked back at the still squawking jay and caught a glimpse of the raccoon peering from behind a branch.

I re-filled my glass and walked over to the grave. I could feel eyes watching me. Lord’s friends mourning from afar, hidden yet present. I stood over the Lord’s grave alone.

A butterfly floated by.

My fingers twitched as I took Lord’s epithet scribbled on the back of a box of his favorite kibble and nailed it to the tree.

When we first met, I never thought it would end.

Now you are gone, and impossible to replace

Life without you, I’m not sure I can face

All that is left, this note I have scratched

Lord you were my Shepherd

A friend so true

Never a day— that I won’t miss you.

Mike, if I may steal your words— you were a friend and “never a day—that I won’t miss you.”

He was a man, take him for all in all.
I shall not look upon his like again.

3 responses to “In Memory, With Love”