I’ve never taught at a university, but I know what schools are like. After I won my MA, I accepted a position as a non-credit teacher at a local community college. Wow! I was stoked—I planned to put all that theory into practice and knew my school would celebrate my work and dedication.

Let’s just say I was delusional. It didn’t take long to discover I was regarded lower in status than that broke second cousin on the doorstep. Like credit staff, non-credit teachers are expected to attend meetings, plan, assess and report but for half the hourly pay. As Alma, a character in Oink, says, “It’s all work, low pay, and no respect.” 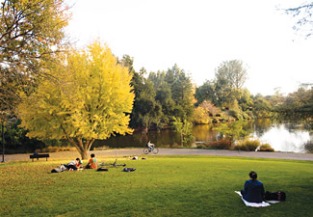 It’s always a delight to meet a protagonist that embodies my own values. Emily Addams is a professor of women’s studies at Arbor State University. Founded as an agricultural college in Northern California, it is rapidly shedding its reputation as an easygoing and humane community as the university adopts the worldviews of the corporations funding research into new technologies and cuts funds to the small programs.

A new Vice Provost has come aboard and Emily and her colleagues from the interdisciplinary programs face a difficult and perplexing choice for funding purposes. If they don’t choose, they may lose their programs, but even if they come in under the umbrella of Humanities or Social Sciences, they will have to prove their programs worthy of receiving funds. One way or the other, the warm community built over the years looks doomed. Building community and fighting injustice are important to Emily and she’s spent her career doing both, especially through cooking and eating.

Emily learns that Peter Elliott, a Professor of Plant Biology has been found face down in one of the school’s pigpens, presumably poisoned. The rumor says a group opposing genetically engineered crops is behind the poisoning as Elliott is researching GMO corn and a staunch supporter of Syndicon, the major GMO seed controller. Emily had learned about the GMO issues at a panel on GMOs and wondered, “was it GMOs themselves or the policies of the corporations that produced them— the relentless focus on profit, the resistance to regulation, the absence of concern for harming, or even helping, others… “ that gave GMOs a bad name?

But Emily has other worries. Forty something with a young daughter and recently divorced, she’s getting into the dating game. As we meet her, she’s worried that her hair-do has flattened (I empathize with that) because she’s meeting mathematics professor Wilmer Crane after work for their first date. Crane tells Emily about finding Elliot in the pigpen clutching a piece of cornbread, which turns out to contain goat cheese and caramelized onions—Emily’s signature recipe.

Emily is named a suspect and rallies her community with food and camaraderie to investigate what really happened. She learns Elliot was receiving secret corporate funding for his new strain of genetically modified corn, he’d betrayed two of his women students and his highly accomplished wife through his philandering, as well as the Save the Fields organization gunning for him.

Named one of the funniest books coming this spring by BookBub.Com, author J.L. Newton describes the first of the Emily Addams series, “Culminating in a twist as curvy as a pig’s tail, Oink: A Food for Thought Mystery is at once a sly send-up of the corporatized university and a reminder of why community belongs at that heart of human life.” She makes a good case for community and organic food, punctuating her points with delectable recipes at the end of each chapter. Her language is both accessible and intelligent, Emily and her colleagues sound like professors, parents and friends in realistic dialog and witty narration. I appreciated the thoughtful and often humorous look at two important themes, the corporatization of campuses and GMOs.

Newton does not support corporate influenced universities, but she does make a case for the potential for GMO foods to feed the world. Respected scientific societies, including the National Academy of Sciences and the 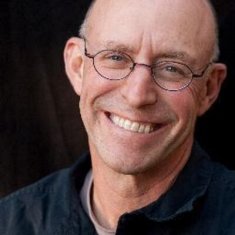 World Health Organization, have concluded that the GMO crops on the market are safe to eat. Even pundit Michael Pollan said recently the technology itself may not fundamentally pose a greater health threat than other forms of plant breeding. “ I think most of the problems arise from the way we’re choosing to apply it, what we’re using it for, and how we’re framing the problems that it is being used to solve.”

Cozy mystery fans, fans of food novels, and readers concerned with the health of our world and its people will enjoy the twisting plot and the delicious dishes shared throughout the novel. I’m working my way through the recipes and reliving the scenes as I cook. Part of that enjoyment comes through the vivid sense of place Newton has created. At times her description becomes lush and lyrical as she details the flora and fauna, the climate and the bucolic campus.

Emily Addams comes alive on the page. She is intelligent, caring, witty, concerned and a great cook. She connects with people through sincerity and food and doesn’t try to be more than her capabilities. She fears, questions herself, doesn’t give up easily and does what is right. I’m really pleased to find a new voice in Emily Addams who I can both identify with and share a corn and cherry scone!

Congratulations to J.L. Newton for her debut of what I’m hoping is a long-lived series of Food for Thought Mysteries. Smart, timely, readable but not dumbed-down—“Oink is a celebration of community connected to the joy of food and fellowship.”—Maggie Berg and Barbara K. Seeber, authors of The Slow Professor: Challenging the Culture of Speed in the Academy. Oink is out today.  Pick up your copy at Amazon or your local bookstore. And if you’re local, join J.L. Newton for her launch of Oink In Berkeley. 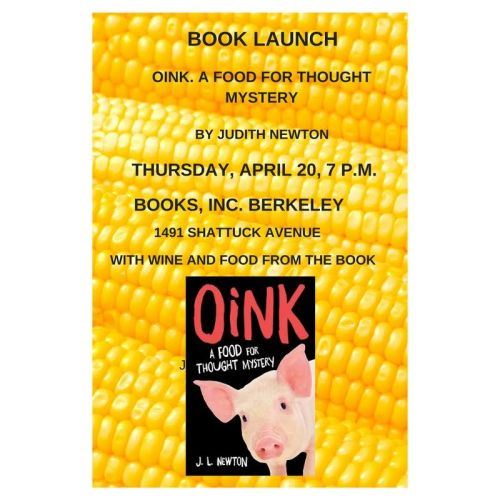 Dying on the Vine

I didn’t think it could get any better than a wedding in Mexico turned murder mystery, but Marla Cooper has proven me wrong with the second Kelsey McKenna, Destination Wedding Mysteries, Dying on the Vine. This time Kelsey and her intrepid crew solve a crime close to home—the Napa Valley—Wine Country. 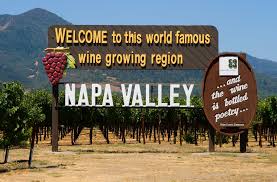 The Napa Valley is possibly one of the most beautiful places on earth. I’m lucky enough to drive through it every week to work, and lately the vines have broken into bud, the mustard has begun to bloom and the fruit trees have exploded into clouds of flower. The wineries have put on their party dresses, welcoming the start of tourist season— locals are flocking out to partake of the spring bounty exuberantly sprouting around us.

Even I left my computer to attend a medieval 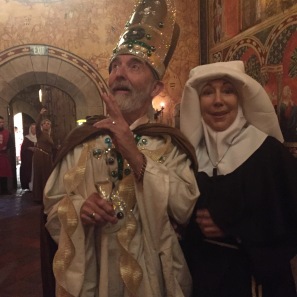 birthday party at St. Helena’s Castello di Amarosa, a 13th century castle brought over and assembled by the Sattui family, I pictured the disaster if barrels started rolling. Kings, queens, ladies, nuns, even the Pope wouldn’t be safe—I was reading Dying on the Vine at the time.

Ok, so they don’t wear medieval costume in the book, but danger lurks in the real lives of wedding planners! Kelsey McKenna isn’t coddling a bride in an exotic setting as the story opens; she’s helping out her friend Brody, a wedding photographer, at his booth at the Wine Country Wedding Faire. She isn’t looking for clients, more interested in the cupcakes, but she’s approached by Haley Bennett and Christopher Riegert in a pinch because her father has fired the planner, Babs Norton. Kelsey can’t say no but, as Babs is the “Queen of Wine Country Weddings,” she calls on Babs to smooth the water and collect Babs’ files. Unfortunately, Babs lies dead on her office floor.

The wedding planning community is small and buzzing by the time Kelsey attends the funeral. There, she is accused by Babs’ assistant, Stefan, of murdering his boss. Because she found the body, Kelsey’s a person of interest. She will have to clear her name and enlists Brody and her new assistant, Laurel, to help.

Meanwhile, the wedding looms and Kelsey and Laurel don’t know any of the details. Simple things like who is the caterer? Where are the flowers coming from? The couple left everything up to Babs and the file isn’t accessible. Kelsey needs to do some sleuthing just to find out what still needs to be done for the wedding and as she uncovers the plan, she also uncovers secrets that send her down one wrong turn after the next.

It’s when another planner is attacked that Kelsey starts to fear for her own life, but it’s too late to turn back. The wedding must go on. And in the end, it does, but with that expected Cooper twist!

Cooper has crafted another funny, smart and on trend cozy mystery. This book may be better than the last, pointing to an author who takes her craft seriously. While the Dying on the Vine is often hilarious, Cooper has woven chilling suspense and heart thumping pacing throughout, balanced out with plenty of descriptions and opportunities to slow down and get to know the characters. The twists and turns kept me reading almost all night and the big climax was a total surprise. I didn’t see it coming—those Cooperesque red herrings again (but I missed the tequila donkey this time).

I fell in love with Kelsey and Brody in, Terror in Taffeta, and I’m pleased to get to know them better in this second of the series. Kelsey proves her integrity and again demonstrates her professionalism, but we also see her more vulnerable side. She needs her friends to help solve this murder. The three, Kelsey and her two sidekicks, Brody and Laurel are well characterized and create an agreeable synergy. Each personality is distinctly portrayed through their actions and the crisp, modern dialog. Kelsey’s and Brody’s banter reminds me of siblings or best friends, funny and familiar. Laurel is new to the scene, but she holds her own, proving her mettle through her trustworthiness, initiative and competence.

Dying on the Vine is a delicious late harvest Zinfandel boasting notes of humor and suspense, full-bodied character and a sweet finish. Marla Cooper and Kelsey McKenna don’t disappoint.

Congratulations Marla Cooper! Dying on the Vine published yesterday and I’m already hankering for my next destination. Might it be Kelsey’s own dream wedding? Where will we cozy-up next? 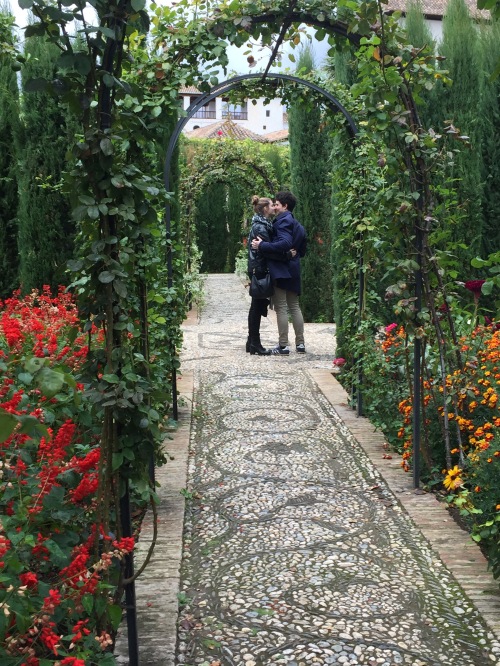 Lovers at the Alhambra, Generalife, Spain