The Guide to Grammar and Writing

The Guide to Grammar and Writing is sponsored by the Capital Community College Foundation, a nonprofit 501 c-3 organization that supports scholarships, faculty development, and curriculum innovation. If you feel we have provided something of value and wish to show your appreciation, you can assist the College and its students with a tax-deductible contribution.

For more about giving to Capital, write to CCC Foundation, 950 Main Street, Hartford, CT 06103. Phone (860) 906-5102 or email: jmcnamara@ccc.commnet.edu Contributions are tax-deductible to the extent allowed by law.

Use a comma to separate the elements in a series (three or more things), including the last two. “He hit the ball, dropped the bat, and ran to first base.” You may have learned that the comma before the “and” is unnecessary, which is fine if you’re in control of things. However, there are situations in which, if you don’t use this comma (especially when the list is complex or lengthy), these last two items in the list will try to glom together (like macaroni and cheese). Using a comma between all the items in a series, including the last two, avoids this problem. This last comma—the one between the word “and” and the preceding word—is often called the serial comma or the Oxford comma. In newspaper writing, incidentally, you will seldom find a serial comma, but that is not necessarily a sign that it should be omitted in academic prose.

Use a comma + a little conjunction (and, but, for, nor, yet, or, so) to connect two independent clauses, as in “He hit the ball well, but he ran toward third base.”

Contending that the coordinating conjunction is adequate separation, some writers will leave out the comma in a sentence with short, balanced independent clauses (such as we see in the example just given). If there is ever any doubt, however, use the comma, as it is always correct in this situation.

Use a comma to set off introductory elements, as in “Running toward third base, he suddenly realized how stupid he looked.”

It is permissible to omit the comma after a brief introductory element if the omission does not result in confusion or hesitancy in reading. If there is ever any doubt, use the comma, as it is always correct.

Sometimes the appositive and the word it identifies are so closely related that the comma can be omitted, as in “His wife Eleanor suddenly decided to open her own business.” We could argue that the name “Eleanor” is not essential to the meaning of the sentence (assuming he has only one wife), and that would suggest that we can put commas both before and after the name (and that would, indeed, be correct). But “his wife” and “Eleanor” are so close that we can regard the entire phrase as one unit and leave out the commas. With the phrase turned around, however, we have a more definite parenthetical element and the commas are necessary: “Eleanor, his wife, suddenly decided to open her own business.” Consider, also, the difference between “College President Ira Rubenzahl voted to rescind the withdrawal policy” (in which we need the name “Ira Rubenzahl” or the sentence doesn’t make sense) and “Ira Rubenzahl, the college president, voted to rescind the withdrawal policy” (in which the sentence makes sense without his title, the appositive, and we treat the appositive as a parenthetical element, with a pair of commas).

(This last piece of advice relies on the authority of William Strunk’s Elements of Style. Examples our own.)

When the state becomes a possessive form, this rule is no longer followed:

Also, when the state or country’s name becomes part of a compound structure, the second comma is dropped:

Use a comma to separate coordinate adjectives. You could think of this as “That tall, distinguished, good looking fellow” rule (as opposed to “the little old lady”). If you can put an and or a but between the adjectives, a comma will probably belong there. For instance, you could say, “He is a tall and distinguished fellow” or “I live in a very old and run-down house.” So you would write, “He is a tall, distinguished man” and “I live in a very old, run-down house.” But you would probably not say, “She is a little and old lady,” or “I live in a little and purple house,” so commas would not appear between little and old or between little and purple. 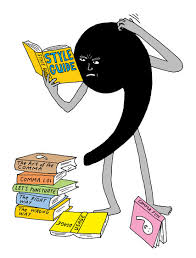 Use a comma to set off quoted elements. Because we don’t use quoted material all the time, even when writing, this is probably the most difficult rule to remember in comma usage. It is a good idea to find a page from an article that uses several quotations, photocopy that page, and keep it in front of you as a model when you’re writing. Generally, use a comma to separate quoted material from the rest of the sentence that explains or introduces the quotation:

If an attribution of a quoted element comes in the middle of the quotation, two commas will be required. But be careful not to create a comma splice in so doing.

And, instead of a comma, use a colon to set off explanatory or introductory language from a quoted element that is either very formal or long (especially if it’s longer than one sentence):

Use commas to set off phrases that express contrast.

(Some writers will leave out the comma that sets off a contrasting phrase beginning with but.)

Use a comma to avoid confusion. This is often a matter of consistently applying rule #3.

Grammar English’s Famous Rule of Punctuation: Never use only one comma between a subject and its verb. “Believing completely and positively in oneself is essential for success.” [Although readers might pause after the word “oneself,” there is no reason to put a comma there.]

Typographical Reasons: Between a city and a state [Hartford, Connecticut], a date and the year [June 15, 1997], a name and a title when the title comes after the name [Bob Downey, Professor of English], in long numbers [5,456,783 and $14,682], etc. Although you will often see a comma between a name and suffix — Bob Downey, Jr., Richard Harrison, III — this comma is no longer regarded as necessary by most copy editors, and some individuals — such as Martin Luther King Jr. — never used a comma there at all.

Note that we use a comma or a set of commas to make the year parenthetical when the date of the month is included:

Without the date itself, however, the comma disappears:

In international or military format, no commas are used:

Use Commas With Caution

As you can see, there are many reasons for using commas, and we haven’t listed them all. Yet the biggest problem that most students have with commas is their overuse. Some essays look as though the student loaded a shotgun with commas and blasted away. Remember, too, that a pause in reading is not always a reliable reason to use a comma. Try not to use a comma unless you can apply a specific rule from this page to do so.

4 responses to “RULES FOR COMMA USAGE”